Mind Your Own Uterus

It seems since even before Eden was born, people only have one question on their minds – “Are you going to have another?” Even before Eden entered the world, people were asking us this. Lately, it’s happening all the time. I don’t know whether it’s because she is almost 18 months old and a lot of only children become siblings around then, but right now almost every person I meet wants to know the status of my uterus… 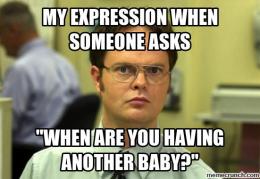 When you’ve been through infertility and loss, coming out of the other side holding a living, breathing baby is a pretty huge achievement. Amy and I were so cautious through my pregnancy because we just did not know whether we would be bringing a baby home. Even now, I sometimes wonder when something is going to go wrong – that’s anxiety for you.

Pretty much from before we conceived Eden, we decided that we would only have one child. A few years ago I might have considered two, but not more than that. Three years of infertility and a miscarriage made us quite sure.

Person: Will you have another?
Me: Nah. It took three years to make Eden!
Person: Oh! But won’t she be lonely?/But you make such lovely babies/But wouldn’t it be worth it?/But only children are terribly spoiled.

WHY DO PEOPLE DO THIS?!

When Amy or I say “no”, that’s our answer. We don’t need to hear a bazillion reasons why we should have another. Some people just don’t want loads of kids – and that’s ok! The size of our family doesn’t affect anyone apart from us.

What I want to say is this… 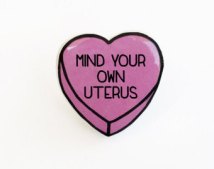 Won’t she be lonely? – No. She does see other humans. We go out every single day. Mind your own uterus.

But you make such lovely babies – Thankyou! Mind your own uterus.

But wouldn’t it be worth it? – Who knows?! Mind your own uterus.

But only children are terribly spoiled – Shut up and mind your own uterus.

This also applies to…

“So, when are you having another?” and “Are you trying fo another yet?” As well as the lovely “But don’t you want to try for a boy?”

STOP! STOP IT! (Also, how does one “try for a boy?” Would I have to put an order in the Superhero Donor? Only boy sperms please! Thankyou!)

No one enjoys infertility. No one likes loss. I didn’t particularly like being pregnant. It was a means to an end for us. I don’t know if we would feel differently if we could just “see if it happens” and “not try, not prevent”, but for us it’s all or nothing. We either try, or we dont.

Emotionally, physically and financially, we are just fine with one little one. One little girl who we adore with all our hearts and who we hoped and wished for for so long. Our puzzle is complete. I just wish people would stop pushing their own agendas and let us be happy with our little triangle family. Our family which is perfect for us just the way it is.

16 Responses to Mind Your Own Uterus