Eden is eleven months old. It’s hard to believe that this will be our last “month” update before she turns a whole year old!

Eden is doing great! She continues to crawl like a pro. Shes super fast and is at the point where you REALLY have to keep an eye on her every move. Unfortunately she also likes chasing the dogs… One of the dogs thinks it’s an awesome game, but the other really does think that she’s about to meet her maker when Eden chases her! Needless to say it’s not something she gets away with doing much. Eden is also standing for a few moments at a time and will crouch down before standing back up again, but we have no unsupported steps at the moment. I have a feeling it won’t be long, though.

Eden’s language still mostly consists of “doggy” and “mama”, with the occasional

“hiya” and “bye” thrown in for good measure. She waves at anyone who she come into contact with and loves to play peekaboo. Well, I say “peekaboo”, but it’s more a case of “where’s Eden gone? THERE SHE IS!” until she gets bored. Any time that she’s behind anything, she will play peekaboo from there. It’s adorable. She can show you where her head is (with a little bit of coaxing) and where her nose is as well as clapping and high fives. She also loves to point at everyone and anything that she finds interesting. Every day we are realising that our little lady is a very smart cookie.

Eden has become much more interested in her books this month and will actually join in when you read to her. She loves the “That’s Not My…” books at the moment, with her favourites being “That’s Not My Fox” and “That’s Not My Puppy”. We have to pause on each and every page to let her touch whatever they are talking about on that page. Then when we get to the end she flicks us right back to the beginning and we start again. I pretty much know all the words now. More books please! Her other favourite books are “Mummy, Mama and me” and “If I Were a Unicorn”.

Most days, she still has two one hour-ish naps. One around 1pm and the other around 6pm. Bed 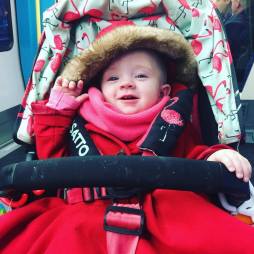 time is 10pm with Amy and I and she usually sleeps until around 7am. This month she dropped her early morning bottle, so now she sleeps right through and then we come downstairs for breakfast. We’re still cosleeping at the moment and I’m not sure when that will change. Despite pressure from family members, we will be taking the lead on this one and moving her when we’re all good and ready. Eden eats three meals a day most days and still had four bottles of formula over the course of the day. This will be her last month of formula before we switch to whole milk.

This month we went to the Baby Show and Eden had her cake smash photoshoot. We just got the pictures back yesterday and they are AMAZING, but we won’t be revealing them until her birthday party on December 10th. They’re gorgeous, but more on that later. It’s getting quite a lot colder here, so we are amassing a small collection of coats for little miss as well as hats, scarves and gloves. Gloves on a baby seems to be a little bit of a lost cause, but we will keep trying because cold hands are the worst!

So, that’s eleven months! This month Eden has her first plane ride as her mama won a trip to the USA! Nine hours on a flight with an eleven month old should be SUPER fun! Then it’s her birthday party and then she is ONE WHOLE YEAR OLD! Ridiculous! We’re also going to the Baby to Toddler Show at the Excel centre this month, which I’m very much looking forward to. 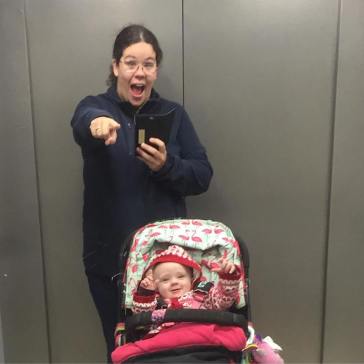 This entry was posted in 2016 and tagged baby, eleven months old, toddler, update. Bookmark the permalink.