Social Anxiety and Being Mum to “that” Child…

Those who know Eden know what a chatty, happy little girl she is. Eden is “that” child. You know the one. You’re on the bus, minding your own business and you notice a baby looking at you from their pushchair. Then they smile at you. Then they start babbling at you. You look away after engaging for a bit and then you hear “eh” or some similar “look at me” noise, which doesn’t stop until you engage with them again. Never mind their poor parents who are trying their hardest to distract the world’s friendliest child so that you can go on with your day. Eden is that child.

Then there’s me. I would rather use the self checkout at stores so I don’t have to talk to people. Same with automated ticket machines, drinks machines etc etc. In an ideal world I would go through my day without having to make idle conversation with people who I don’t know. I always feel like I look a prat for some reason – probably comes from being bullied as a child. I tend to always think I’ve said the wrong thing or people are laughing, which makes me stumble over my words. I also constantly worry about being judged, which probably comes from the judgemental world that we live in. I characterise it as mild social anxiety, although it has never been diagnosed as such.

I’ve always worried about Eden copying how I am in social situations, so I try to put it to the side around her. Having kids is a great way to pull you out of your own shell, but MAN is it hard work! Eden literally wants to chat to EVERYONE and has been that way since she’s been able to smile. We always get told “what a happy baby!” and “oh look at that smile!” and I often wonder what exactly I’m supposed to say to that? When she keeps talking to people and they’re trying to ignore her I almost want to jump into a hole and not come out. Then comes the bazillion questions – how old is she? Can she walk yet? Can she say mum? etc etc and the whole time I’m just thinking “can I go now?” It’s not rudeness, it’s anxiety.

I’m slowly learning to follow Eden’s lead. If she wants to chat, I let her get on with it. If 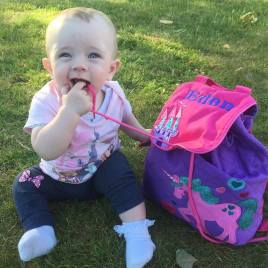 someone wants to talk to me about her, I answer their questions and such. It did get worse after Eden was born because people just assume you know what you’re doing, whereas I was very much still caught in the headlights thinking “what is going on?” We’ve started organising playdates with other mummies and babies, partly to kick my socially anxious butt out of the house and into somewhere that there are other people! I’ve tried to start talking to other parents at softplay while Eden plays with their little ones, I chat to old ladies on the bus and I’ve started saying “SHUT UP!” to the anxiety in my head.

It’s a part of parenting that I didn’t expect to be such a learning curve. As I’ve put other parts of me aside for Eden, I’m finding I have to push away the socially anxious side too, because more than anything I don’t want to dull her flame. I don’t want her to be socially anxious or overly worried about silly things. I’m getting better at it and I have Eden to thank for that, but I’ve a long way to go before I’m as chatty and confident as the world’s happiest baby!

8 Responses to Social Anxiety and Being Mum to “that” Child…