Here we are at six months! Well, I’m late as usual so we are actually closer to seven months. But here’s what Eden has been up to.

Food! We love food! We’ve done a little of the ole baby led weaning. Eden has occasional solids but mostly purees. I’m confident that we know how to deal with choking, but a near choking incident a couple of weeks ago gave us the willies, so we’re working back up to proper solids again. Puree wise she is enjoying all of the vegetables. She’s not really a fan of peas, but everything else goes straight down the hatch. She’s also a fan of yoghurts – we’ve been giving her my first Petits Filous and the Ella’s Kitchen yoghurts too. We’ve finally moved her off the reflux formula as her reflux is much better now. She’s also got to that stage 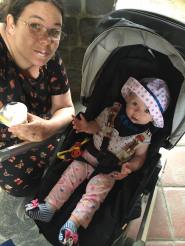 where the grabby hands are just out of control, so she’s had little bit of other foods too. We had a great time sharing pineapple ice cream in Disneyland Paris, which we both very much enjoyed. Nothing is too much for those little grabby hands. She’ll go for food, drinks, toys… anything really.

This month was the month she had chicken pox, too. You can read about her experience with them in this post. It confirmed my feeling that even though you have to pay privately for the vaccination here, if we have any more children I will be doing just that. For Eden it thankfully happened with no complications, but it was very uncomfortable and upsetting for her and for us and I wouldn’t inflict it on my worst enemy. Not life threatening for Eden thankfully, but if we can avoid it for any future babies, we definitely will.

Firsts this month. Eden had her first trip to the beach, to see her Great Nan. Unfortunately it was too cold for a paddle in the sea, but we had a great time. It was also too wet to play in the sand, but we rectified that a couple of weeks later with a trip to London’s “Urban Beach” on the South bank. Eden adored the sand. Apparently a lot of babies are freaked out by it at first, but not our girl! She was straight in there trying to eat the lot… I often forget that babies learn with their mouths and the amount of time I spend pulling things out of hers grows every day! We also took her swimming for the first time this month and we all had a great time. She very much enjoyed the water.

We had a few shouty, temperature ridden nights on our first holiday with Eden to

Disneyland Paris and on our return we realised why – she’d only gone and cut her first tooth! It’s her right hand lower central incisor and is currently making our nights hell. We invested in a Sophie La Giraffe who is very much helping control the situation. I’m guessing this is the start of a loooong few months of teeth popping out. Eden is dealing like a champ, though. It must absolutely hurt like hell, so I can’t hold it against her when she wakes in the night crying because of it.

Eden is now comfortably wearing mostly size 6-9 month clothes although she still fits many of her size 3-6 month outfits. She weighs about 16lbs and I have no idea about her length. Sitting up by herself is almost second nature now and she can support herself sitting up. She can’t yet pull herself into a sitting position, but I’m assuming that will come with time. I’m guessing she’s not far off crawling as she’s making frequent attempts at escaping now. She’s realised that rolling is a way to get places, too,. which is fun! She loves to stand and can support herself standing momentarily if she holds on to something. She’s clearly desperate to get around now, so I’m hoping it wont be too long for her. I think I’ll live to regret that sentiment.

Eden loves to chat. Of course, she doesn’t really say words yet, although her favourite 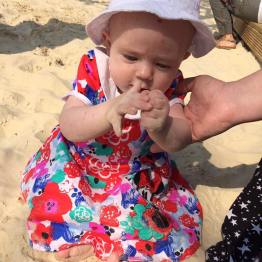 babble noises are “mamamamamamama” and “bababababababa”. Mamamamama usually comes out when she is hungry or upset, which can be heartbreaking. Anyone who gives her attention nowadays gets a good chat from her. She loves to blow raspberries and make general high pitched noises. Another really fun habit that she’s got into is coughing to get people’s attention. Someone looks away from her after engaging and it’s almost like she’s going “ahem!”. I think it’s hilarious, but it can be annoying sometimes. I’m glad she’s such a sociable little girl and I’m hopeful that she will stay that way. I’m trying not to project my own social anxiety issues onto her.

This month we have her naming day party, which I’m very much looking forward to. I love celebrating our little girl, so doing that with family and friends will be fantastic. We’ve gone for an Alice in Wonderland theme as it’s “A Very Merry Un-Christening” so look forward to the photos from that one. It’s going to be a fun day. Aside from that she’s going to her very first Pride celebration this weekend and we’re fitting in lots of other adventures through the month. We’re going to a safari park/zoo type thing and might also make it to messy play one of these days.

So, that’s the six month update. I can’t believe she’s now closer to a year than newborn.

It’s scary. I’m currently applying for part time at work, but if I don’t get that I will be returning full time in January. It’s getting to the scary part of maternity leave where I pretty much get no money, so things are getting interesting! Hopefully it’s all going to fall into place and I can stay part time at work. Ideally I really don’t want to go back full time, but needs must. I know whatever happens, we will work it out as a family and we will all be ok.

It’s a bit of an odd feeling at the moment – being happy that she’s hitting milestones and growing up, but at the same time realising that our tiny newborn is turning into a child with a personality! I’m guessing that feeling isn’t going away at time soon. I often say “stop growing!”