I’m so excited! It’s around a month until our Disneyland Paris holiday and I absolutely cannot wait! 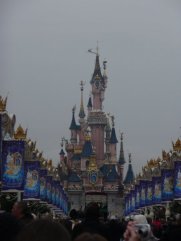 What I don’t understand, however, is why people keep telling me “Eden won’t appreciate it”.  I totally get that it will be a different holiday to what we’ve had before, but I definitely think that taking Eden will add to the magic, not detract from it.

Also, what is “appreciate”? What are we waiting for? Is it ok to go when she’s big enough to go on some rides? Or must we wait for the dizzy heights of “tall enough for Space Mountain”? Should we go when she’s little enough to still appreciate the characters, or do we wait until she’s older and thinks that’s “uncool” so that she will “appreciate” it more?

Amy and I have been before as a couple, so it’s not that we are going purely for Eden – that

probably would be silly at this age seeing as she doesn’t yet know her Mickeys from her Donalds or her Plutos from her Goofys. We had an awesome Disneyland holiday in 2007 (almost ten years ago!) just the two of us – it was December, the park was in full Christmas swing and it was maaaaagical. But did we “appreciate” it without a child to be fully immersed in the magic?

We’ve got lots planned for our break. Eden will be six months old, so won’t be able to do much in terms of rides. However we’re looking forward to doing lots of character meet and greets, taking in the atmosphere and watching some shows. Most of all, I’m looking forward to getting away for a bit and spending time with our little princess in the Happiest Place on Earth!

5 Responses to Disneyland Paris for Babies