We’ve reached THIRTY weeks pregnant! Eden is the length of a cucumber and is gaining lots of pudgey baby fat. The official “updates” say that she likely weighs 3lbs, but she weighed 3lbs1oz (estimated) two weeks ago, so I would imagine she’s carried on gaining nicely. Her lungs are almost fully developed and she will be opening and closing her eyes in there – we saw her doing this at the 4D scan and it was BIZARRE! 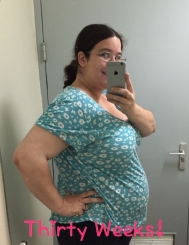 How am I feeling? Fine. Just standard really. Tired as usual and I do feel like I’m carrying a lot of extra weight as I sometimes get a bit of hip pain, but otherwise can’t complain. Her kicks have turned more into wiggles and long movements, which is a little odd to feel. I guess she’s likely running out of room in there!

I had a random glucose test at my midwife appointment because of Eden’s tummy being on the large side. A high result on this would have indicated that I would need the three hour glucose tolerance test. I was worried about the result as I hadn’t known that test was coming and had had a bottle of orange juice and an almond croissant that morning, but the number came back at 5, which is totally 100% normal. Anything above 7.9mmol/l would have indicated for me to do the 3 hour test, so I’m happy with that!

I also had the midwife check my vitamin D as mine has always been VERY low and I was a little worried about the effect on Eden if I am still deficient. This came back at 86nmol/L which is EXCELLENT for me as my previous numbers (a year or so ago) were 13nmol/L and then 33nmol/L, which are both VERY low. So, I’m glad those are nice and normal. I suspect my change in job had an effect on that!

Everything else is totally normal. I had a consultant follow up, which was all fine. Fundal height is normal, Eden’s heartrate is great, urine was clear and blood pressure was good. I also got my flu jab. Great news all around.

Amy and I talked last night about just how great our journey so far with the new hospital has been. Seriously, I could not be happier that we changed. We both feel very much included and respected at this hospital. It’s like being any other couple expecting a baby, whereas at the other one we felt like freaks of nature. I also love that when it comes to treatment options, they always explain all of the pros and cons, give ACTUAL NUMBERS rather than just saying “higher risk” and answer all of my (often silly) questions without so much as a second thought. I really feel like we are in great hands, which is a far cry from the hospital where we were booked before.

Yesterday was Pregnancy and Infant Loss Awareness Day, which I always think is important to mark if you feel able to. I posted the following to my Facebook wall…

Today is Pregnancy and Infant Loss Awareness Day.
Tonight I light a candle for not only our lost baby Squishy, but for all of those lost through miscarriage, ectopic pregnancy, molar pregnancy, blighted ovum and all of the other heart wrenching ways that a baby can be lost. Also for those gone too soon after birth and for those parents whose dream of a family was stolen from them by infertility – that loss of a dream is a real loss as well.
Thinking of everyone who has lost. 1 in 4 is not just a statistic. 1 in 4 is me.
We’re so grateful for our growing baby girl, but will never forget the infertility and loss journey that came before her.

I wanted to acknowledge my friends who have made the choice to live child free due to infertility as well, as I feel that is a loss too. Pregnancy loss (early on) is mostly about imagined future rather than the actual physical loss, in my opinion, and I think losing your child due to infertility is very similar. It’s all a loss. We all grieve. It’s just what we’re grieving for that can be different – whether that is a physical loss or an imagined future.

It’s great that people are starting to talk about pregnancy and infant loss. It affects so many people that it’s about time we spoke out about it.

Thirty weeks is a bit of a freak out point for me as we move into single figure weeks. I worry that we have so much to do and so little time, but then I put it in perspective. This little girl has somewhere to sleep, clothes to wear, food to eat, nappies to poop in and mummies to cuddle. That’s the bare essentials covered. She also has a whole bunch of non essential stuff, so as much as there’s still things we need to get, we’re not doing badly at all. I know that by the time she gets here we will be ready in terms of things that she needs.

I just need to talk my brain into being ready for this little human as well!