An Ode to the Rollercoaster That is Temping…

The last few cycles I have been charting  my temperatures using Ovusense. I have noticed that from about 3 or 4 days post ovulation, my temperatures go on a steady decline until my period arrives. Here is last cycle’s ovulation chart. 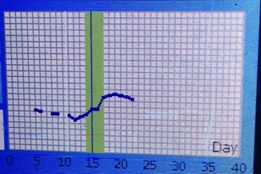 I stopped temping at seven days post ovulation last cycle as the slow decline was just absolutely depressing. At that point I knew my period was imminent – that many dropas in a row would never mean anything good. And lo and behold late in the evening of nine days post ovulation my period showed her “lovely” face.

So this month, when my temps started doing similar, I wasn’t exactly enthralled. Today is seven days post ovulation bu body signs (or six days post ovulation if you go by ovusense)  and I had been having the same kind of sloooow, boring dips in my temperature that signified my period would soon be on the way. I had a tiny bit of spotting in the last three days – so tiny that had I not been looking for it, I wouldn’t have spotted it. People kept telling me “oooooh it could be implantation bleeding. Oooooh they could be implantation dips”, but having seen the pattern from the cycle before, I had a feeling they were nothing and my temp would continue to fall until my periosd showed up.

I was at home with this idea. Of course, I would rather be pregnant this month, but I have clomid to start next month, so at least there is a plan. I will admit that I spent some time a few days ago waggling the clomid box at my uterus and telling it “Now come on you lot. You need to get your act together or I will use the drugs. Don’t MAKE me use the drugs.” – the things trying to make a baby does to you.

So, in my state of quiet acceptance that my period would be on her way, needless to say I was a little bit shocked when my temperature did THIS this morning. 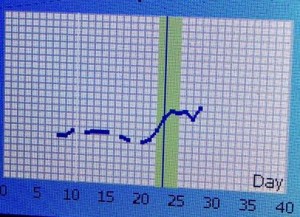 That’s right. It went UP. I now have a little hope that this cycle may well be the one. Normally, with my period due in three days I would expect my temps to be taking a tumble, but that rise is very pretty to look at. With ovusense being an internal monitor, it isn’t affected by outside things like a thermometer would be, so I don’t need to worry abotu whether my room was warmer or whether I was wearing more or less in bed.

I’ll keep you all updated. Of course, nothing is ever certain on this crazy rollercoaster ride, but it’s nice to have a little bit of renewed hope.

11 Responses to An Ode to the Rollercoaster That is Temping…