This week is National Fertility Awareness Week. As someone who has dealt with infertility (as many have), I think it is so important that people think about and understand infertility a little bit. Understand how upsetting it can be. Stop dismissing it like it is no big deal. 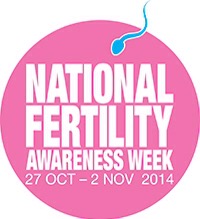 Me and my partner started trying to conceive our first child in February 2012. We are a lesbian couple and tried with a donor. As much as I thought I was prepared for the journey, having read a hell of a lot online, I soon realised I wasn’t. Your body tricks you. That whole two weeks your body is a bitch to you! Especially when it is the first month and the first time you are actually paying attention, by the end of the two week wait I was utterly convinced that I was pregnant. Imagine my shock when I tested and it was the biggest, fattest, most negative test I had ever seen in my life. Not even a squinter. Nonetheless, my period was missing so I assumed it might be a shy positive test. I felt pregnant. How could I possibly not be? Needless to say I wasn’t pregnant. Turned out we hadn’t even inseminated at the right time. Me and my body fell out big time!

We tried for the following eight months with no success aside from what I think may have been a very early loss – or a chemical pregnancy as they are known, I will never know if that test was actually positive or whether it was a false positive,as I started bleeding before I had chance to test again. Every month my body played tricks every month it gave me different “signs”. Every month I was convinced that this month would be the one. Every period is like a kick in the face. Every negative test makes your stomach sink and makes you wonder what the hell you are doing. Why are you putting yourself through this every month? You’ve tried all the vitamins, all the tips and tricks – why isn’t this happening?

Eventually, in December 2012 we gave up. We stopped. We decided enough was enough and it was time for an indefinite break. Imagine that feeling. I had something of a mini breakdown at that point. I was so gutted that over a year my body hasn’t managed to do what I thought it should have done. All the way through school, we had been told that if you had unprotected sex, you WOULD get pregnant. If you came within a hundred metres of sperm you would get pregnant. It’s what your body is designed to do. So, when it doesn’t work it is a shock to the system. You hear the stories about people who can’t conceive and you think “poor them” and you hope that they get their baby, but you also hope you are never in that position. I’m not a smoker or a drinker, I have never done drugs and I generally look after my body. Why me?

We tried a few times in 2013 with no success, and Amy even tried a couple of months too, figuring she might as well. It was in January 2014, after an evening at a friend’s house that I ended up in tears. Our friends have two beautiful little girls (although they only had one of them at the time – the other was still being cooked!) and I realised that every time I saw them it made my heart ache. I ended up in tears that night on the bus home because, like most women suffering with infertility, I just wanted a baby, it was at that moment that we decided to start again. We decided that if we weren’t trying, it was definitely not going to happen, so we might as well try. We contacted the donor that we had used in 2013 and he said he was happy to help.

February 2014 we started trying again. When positive opk day came i excitedly texted the donor. He said he was at work, but could come over later that night. Then a Cole of hours later told us he couldn’t make it. Not that day, not the next day and not even a last ditch attempt the day after. I was gutted. I know a donor donates by choice and has a life as well, but I was absolutely devastated. Eventually we decided to carry on as normal. Wait the cycle out and try again the next month. The next nth we got our donation. Then we got… A period. No matter. We picked ourselves up and got ready for April.

More OPKs, more worrying that the donor wouldn’t be available, and true to form he wasn’t! I posted a desperate ad on a Facebook forum and received plenty of replies, but only a few were actually worth looking at. A lot were along the lines of “I will help you, but I only donate through sex.” So I didn’t even give those the time of day. Then there was Superhero Donor. He was polite, respectful and genuine. We chatted, he was available that night. I made sure Amy would be home when he came over and made sure he understood completely that we are AI (artificial insemination) only and will be taking no part in producing the sample.

That night he showed up right on time. We got on very well, chatting for a little while before he went and produced him sample upstairs, leaving the pot on the bedside table for us. He wasn’t even phased my Gizmo, the man of the house and yappiest dog that there is! After he left we inseminated. Then waited… And I got my period.

I had been very hopeful that cycle, but we pulled ourselves together and moved on to the next cycle. Turned out this one was to be the one. At ten days post ovulation, I did a sneaky pregnancy test and saw a faint line. I did a better test and saw a line that was glaringly obvious! We were pregnant! Two years and four months since starting to try, it had happened. Those weeks that followed were some of the scariest weeks there have ever been. But aside from being scary, they were also the happiest. Neither of us could believe that it was happening for us. We were on cloud nine, that was until 7 weeks and 4 days when our darling Squishy bid us goodbye and joined the Angels.

Imagine how thrilled we were to be pregnant, turn that on its head and you will understand how sad we were about our loss. Our much wanted baby was gone. I’m not going to lie and say that almost four months later, we are over it, because we’re not. I still remember milestones, we still think about what could have been. But we have returned to our “we have to try or it will never happen” stance.

Going back to the doctor after we lost Squishy was hard. I feared something was seriously wrong, that I would never be able to have a baby. That I was totally and utterly infertile, barren, broken. He didn’t say that – he told me I have PCOS. Polycystic Ovary Syndrome, which is essentially caused by a hormone inbalance. I suspected this might have been the issue. Many women with PCOS don’t ovulate properly and have low progesterone. He gave me metformin to help balance my hormones and we will be starting clomid next cycle. It’s good to have a plan!

Things people tell you when it’s not happening are funny. They say things that I’m sure in their head is incredibly helpful, but in reality is just not. Things like (after losing Squishy) “well, at least you know you can get pregnant” or “it was only a ball of cells”. People who find out you have been trying a while and offer their advice – “just lay with your legs up for 30 minutes. Worked for me!” Or worse “I never had to try. It just happened”. Then there are the people who go for “alternatives” like “why don’t you just adopt?” Or “Could you not get IVF?” Or “life doesn’t have to be about children. Enjoy being a couple for a bit”.

I know we have only tried for eighteen cycles – this is cycle nineteen. I know that is not long in the grand scheme of things. I know our journey is potentially only beginning compared to what others have been through, but I think even a few months of your body not doing what you want it to is hard. People who haven’t been through it don’t appreciate how hard it is to go cycle after cycle with nothing but a bloody mess to show for it.

I have plenty of fears about this process. What if it never happens? What if we have to try for ten years? What if we have several more losses? What if we end up with the cursed “unexplained infertility”? But then I remember how worth it it will be. How amazing it will be when one day we again see that second line came up. How magical it will be to see the first scan – see that little one wriggling around. How amazing the moment will be when we first hear that little heartbeat and see it flickering on the screen. The moment when we find out whether they are a little prince or a little princess. And then the moment we get to hold them. Get to hold something that we made. Get to teach them and grow with them and see the world through their eyes. No matter. How long this takes and what path we go down, it is going to be worth it.

Let’s start talking! You can find out more about National Fertility Awareness Week by Clicking Here