Good afternoon to you all on this slightly cloudy Sunday! I hope this finds you all well. I’m really impressed with the reader figures for the blog this month, so thanks so much to everyone who has taken the time to read about my slightly rambly trying to concieve journey! I’m joining you from my sofa with a coffee, Elaine Paige on Radio 2 and the pups! Gotta love a bit of musical theatre. 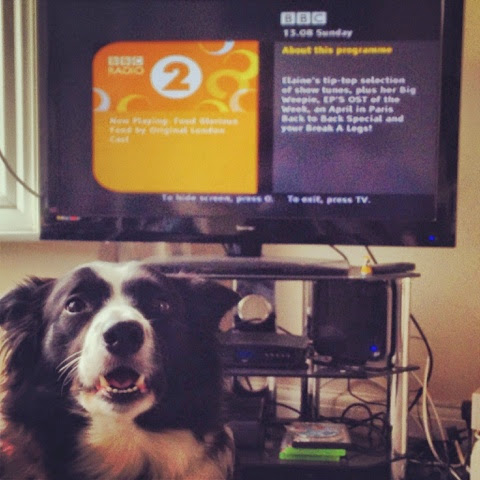 So, today is four days post ovulation, or 4dpo. The two week wait to test is the longest thing ever, even with a luteal phase (the period between ovulation and your period) of only ten days like mine. On my night shifts over the weekend I found myself celebrating the extra day post ovulation as soon as it hit midnight!
Here’s some nutty symptom spotting for you. Before anyone comments and tells me this, I am well aware that implantation doesn’t usually happen until seven or eight days post ovulation, buuuuuuttt I’m all for keeping track of things that could be symptoms for months in the future. Even if this month isn’t e month, at least I know what is relatively normal for me. Plus… It’s kind of fun!
So here we go! I’ll catch you up on what I previously posted on two days post ovulation, and then we’ll move on to today.
Creamy cm – lots of it
Keep having stomach pain that is like that ” you’re going to crap your pants NOW” pain. Run to the loo and nothing. Not even the courtesy of a fart
Peeing a lot, but also have been drinking more as I always do on night shifts
Pinching and jabbing lower abdo pain
Period type cramps. These woke me up. Rude!
Tingly boobies
Tired… But then I have been on nights so that is pretty normal
Nausea. Acid burps. Keep almost yacking on suit wankers on the train
Since those 2dpo “symptoms” I have had the following going on.
Oddly, in the evening of 2dpo I had a small bleed. Just one wipe and it was gone, so I’m assuming it was probably ovulation bleeding. Last time this happened was our second ever cycle trying and we got a positive pregnancy test, which was quickly followed by a very early miscarriage, also known as a chemical pregnancy. So, that’s a little exciting. If nothing else it gives me hope of a strong ovulation!
Everything else has continued, including the period type cramps, which seem to be worsening every day. Yesterday I was utterly convinced I was going to start my period. I just feel so crampy! Some of it is dull cramps, but occasionally I have a bit of a twitchy feeling or like a “vibrating” feeling. There is also back pain and upper thigh pain showing up, which is normal for me but only when I am actually having my period! The nausea is ever present but tends to be more so at night.
Milky cervical mucus. And a fair bit of it. It’s like egg white fertile mucus but hades a milky white tinge to it. I have done an ovulation test just to make sure I’m not having another surge and ovulating, but that was of course negative, which I expected.
Sore nipples. Not sore boobs. Just nipples. Odd for me.
Constipation. I literally haven’t pooped since 1dpo. Too much information, but normally I’m very regular. I even had pizza yesterday to no avail!
Hungry! Constantly hungry. Even now, having only had a cooked breakfast about an hour ago, I feel like I’m starving.
Tiredness. I’m constantly tired normally, so I’m not sure whether to count this or not. Even with all the sleep I’ve had the last few days, if you gave me a pillow right now I would drift right off.
Temps! I chart my basal body temperature and my chart is looking SO pretty! I usually don’t have a steep rise in temperature after ovulation, but this month my temp SHOT up. Here’s this months chart and January’s as a comparison. I haven’t used last month’s chart as I didn’t ovulate last month, so tents not a true comparison. As you can see, there is a quite a bit of a difference in the two charts. 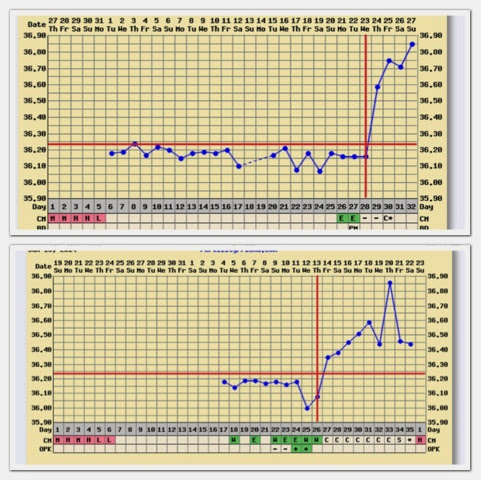 So, there’s your round up for four days post ovulation. I feel like this two week wait is dragging already, but I am working the next three days, so that should help to pass the time until seven days post ovulation. Then really I’m on the home track, as I usually get my period around ten or eleven days post ovulation.
I’m hopeful for this month. It would be lovely for us to catch on our first month back. I know we haven’t waited long in the grand scheme of things, but it feels like forever, watching our god daughter grow up each time we see her really makes my ovaries hurt! I did ask her to have stern words with them, so who knows – haha! Speaking of Ellie – I finally got smiles out of her, so I’ll leave you with this picture as an end to this post! 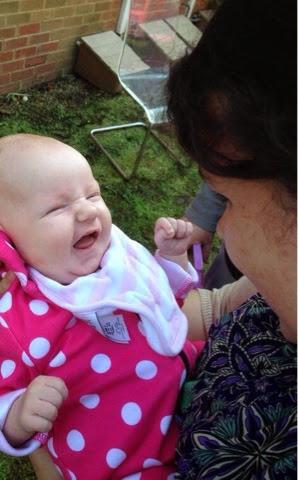