Yesterday morning  I got a very close to positive opk. Historically I have always had my positive on cycle day 26, which was yesterday, so I contacted our donor. I had spoken (via text) with him the week before and he had said he wasn’t very well, so was alll preapared for him to say he couldn’t donate.but no. Nothing. Not a text back, nothing at all. He did post on Facebook saying he was sick, but he read all of my messages (Imessage lets you see when texts have been read!) and nothing back. Late last night we decided we were not going to wait around again and posted on a few forums looking for a last minute donor.

This morning I had a lovely reply from a gent I had spoken to previously, and he has agreed to donate tonight for us! Superman to the rescue! It’s gems like this that make the donation community a great place and a place that works. I had offers a little later from a couple of other guys who were equally as kind and willing to help, but it just let them know we had already found someone and wished them luck in the future. It’s a good job we found someone, as this morning my ovulation test looks like this, 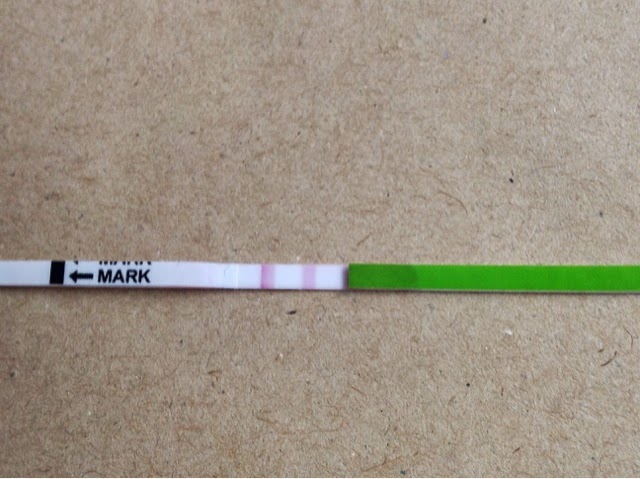 So, hopefully the new donor will show tonight and we will finally be on a proper two week wait!
UPDATE – he did show and was a complete gent! Bring on the two week wait
A word about the former donor. It’s a shame because he is a nice guy. Easy to talk to and helpful. BUT I just get annoyed with lack of communication. If you can’t donate, just say no. It sucks, but it’s easier than waiting around and at least then everyone knows where they stand. Donors aren’t in any way obligated to donate and I think most ladies trying with donor sperm appreciate that, but communication is key. If you can’t donate, no matter what the reason, just say no. Simple. Don’t disappear off the face of the earth and ignore someone who was relying on you. I appreciate the two times he has donated to us (to Amy last year and to me last month) but we really decided we need someone much more reliable, particularly as we have been “back” trying to concieve for three months and as of yet haven’t had a real try. The first month our donor had family commitments and couldn’t make it, the second month I didn’t bother ovulating (thanks body!) so to get let down for the third month was heartbreaking.
But anyhow, onwards and upwards. Fingers crossed from tomorrow we will be on our first two week wait in a while! And I hope more than anything that it ends in a BFP!
#lesbian #TTC #donor #pregnancy #blog