Waiting for the +opk and Vitamins

Posted on February 5, 2014 by Papa, Eden & Me
So, we’re just waiting around for a positive opk. Today I looked at how much cycles shape on on fertility friend (link in the “sites we like” page) and I found that although I knew they were irregular, I hadn’t quite realised HOW irregular they are. Basically, my cycles are batshit crazy! 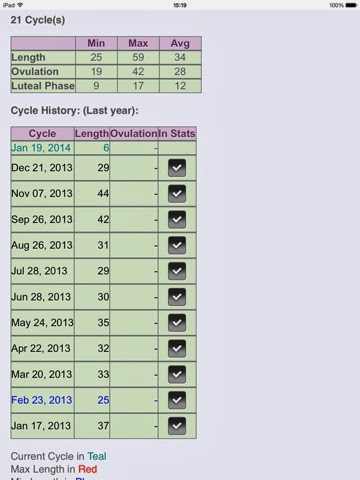 See? Nuts!
When we were trying before I was diagnosed with PCOS by symptoms and bloods, but when I questioned the diagnosis it was retested and pronounced clear of PCOS. Also had thyroid checked and a full blood count. The only thing that was flagged up was extremely low vitamin D.
On researching this I have discovered a few things. Did you know that 93% of couples with fertility problems have vitamin D deficiency? There has never actually been a study done on how vitamin d affects fertility (as far as I could find) but having a good amount of vitamin D would definitely help my overall health, so I invested in some good vitamin D tablets. Three a day. They also contain calcium, which is great for healthy bones, teeth and nails.
I also found from my blood results that my cholesterol was just a little high, so have started on omega 3 tablets to help bring that down. Omega 3 is also an important fatty acid that can help with foetal brain development when pregnancy occurs. It is apparently also healthy for the adult brain. All good.
When we were last trying, I noticed my luteal phase (the bit between ovulation and period) was short at a maximum of ten days. One month it scared the hell out of me by only being a measly eight days long!  One of the things recommended for this is Vitex, also known as Agnus Castus or Chasteberry. I tried this last time we were trying and had an incredibly long cycle, so I’m not going anywhere near that again. B vitamins have also been seen to help with short luteal phase, so I bought a b complex tablet which I am taking one a day. I was told you shouldn’t take more of one b vitamin than the other, so although b6 is the one that helps, an extra dose of all the B’s will be good to go too.
On a visit to my local health food store today, I spoke to a advisor regarding my decidedly wonky cycles. She. Recommended vitex, which I stomped on immediately. I want to try for a baby now, not in three months when my monster vitex cycle would end. She then suggestedr ed raspberry leaf, which it had not considered before. Like most, I had only heard of hit his being used to help with labour, but apparently it is useful when trying for a baby too! She explained it was helpful to regulate cycles and hormones, explaining that it helps strengthen the uterus, consequently raising progesterone and thickening womb lining. It also helps with period pain – excellent! She advised it was safe whilst triggering and at the beginning of the first trimester, but should be limited until the third trimester as too much can cause contractions. The recommended dosage whilst trying is 3-6 tablets a day, so I am having three tablets a day and then drinking the tea as and when I feel like it.
I am also taking a prenatal, for all the other helpful bits and bobs.
Here’s hoping it leads to some success and I hope this post was useful to someone!
#lesbian #TTC #donor #pregnancy #blog